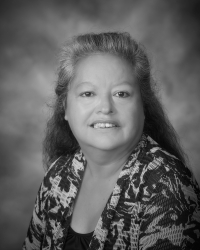 Yvonne Maracle has used art and advocacy as powerful tools for telling the stories of Indigenous people and improving life for those among them who face difficulty, especially in urban Hamilton. Maracle has opened paths for other Indigenous artists by working to establish an association of Indigenous photographers and the first gallery solely dedicated to showing their work, in the hope of counteracting negative stereotypes portrayed in other photography. A member of the Mohawk Nation’s Bear Clan, Maracle was born on Six Nations Reserve and moved north to Hamilton with her parents, where she grew into a family and community leader.  Known as a caring and giving person, Maracle is treasured as a good listener, a generous neighbour and family member. She is considered a primary figure in improving life for Indigenous people in Hamilton. Maracle was a cultural worker for De dwa da dehs nye>s Aboriginal Health Centre and is currently working with the Social Planning Research Council in Hamilton. In 30 years of advocacy and community work, she has also served as a housing co-ordinator for the Social Planning & Research Council, and Community Developer for the Hamilton Executive Directors' Aboriginal Coalition.  Maracle worked as the Team Lead for the Aboriginal Housing First Homelessness Partnering Strategy that produced the 2001 report, Voices of Our People. As a volunteer, she has served with the Hamilton Regional Indian Centre, the Niagara Peninsula Aboriginal Area Management Board, the City of Hamilton’s Aboriginal Advisory Committee, the Mohawk College Arts Committee, the United Way, and with the Hamilton Roundtable for Poverty Reduction. Her service has brought honour and value to Hamilton, earning her a place in the Gallery of Distinction.