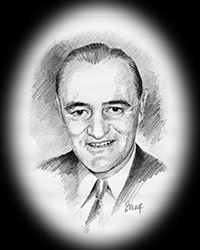 Victor Kennedy Copps was born in Haileybury, Ontario and worked in Timmins. He moved to Hamilton in 1945 where he worked at the radio station CHML, first as an announcer (1945-1950), then in the sales department (1950-1960). In 1960 he ran his first political race for controller and won a stunning electoral victory. In 1962 he was elected Mayor and served until 1976. He was responsible for the construction of many new facilities including Hamilton Place, Jackson Square and the Canadian Football Hall of Fame. Felled by a heart attack he left politics but not the hearts of the people he had served. One of his enduring dreams had been of an arena for Hamilton. In 1985 an 18,000 seat arena opened bearing his name. Copps Coliseum is a lasting tribute to the Mayor of the People and his love for his city – Hamilton.