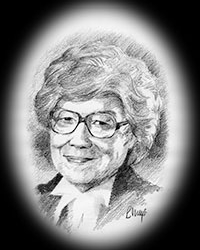 Born and raised in Hamilton, Mary Wong has been active for many years in community affairs. She was principal of the National Chinese School in Hamilton and served as a Chinese interpreter in city courts. In 1943 she and her husband opened the Aero Restaurant on Barton Street. She became actively involved in politics and served as a member of the Canadian Consultative Council on Multiculturalism. In 1977 Mary Wong became the first Canadian of Chinese origin to be appointed a Citizenship Court Judge, serving in the capacity until her retirement from the bench in 1985. Her motto has always been: “I believe what you put into life, you get out.” (Spectator interview, July 16, 1985).