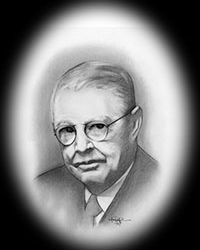 The dean of the Canadian construction industry, was born in Hamilton in 1885. At age 18, he entered his father’s contracting business, taking it over in 1910. After World War One, with his brother Roy, Joseph Pigott made the Pigott Construction Company one of the largest such firms in Canada. Many of the major structures in Hamilton, including the Court House, City Hall, McMaster University, Westdale Secondary School, the Hamilton Central Library and Farmer’s market complex and Copps Coliseum were built by Pigott. He advocated training programmes for workers, financed by the government, and for 32 years was chairman of the industrial Apprenticeship Advisory Committee. Created a Commander of the British Empire for his services during World War Two, Mr. Pigott was created Commander of the Order of St. Gregory by Pope Pius XI for the construction of Hamilton’s Basilica of Christ the King.