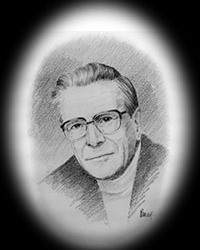 Born in Toronto, Jack McNie came to Hamilton in 1946 following RCAF service to join the advertising firm of Russell T. Kelley Limited. He became president in 1956, retiring in 1971 on his election as a Progressive Conservative member of the Ontario Legislature for Hamilton-West, subsequently being appointed Minister of Colleges and Universities. His belief in the power of the informed, motivated citizens was reflected in the creation of the first co-operative nursery in Hamilton and his chairmanship of the steering committee of the Hamilton theatre auditorium project which led to the opening of Hamilton Place in 1973, and paved the way for the Hamilton Convention Centre. He also served as chairman of the International Council for Adult Education management committee.