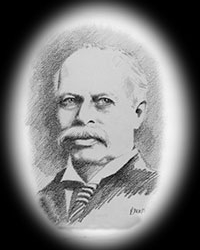 Hugh Cossart Baker Jr., educated in Galt, enlisted in the 13th Battalion Volunteer Militia Infantry and carried the colours against the Fenians at the battle of Ridgeway on 1 June 1866. He was instrumental in forming the Hamilton Street Railway Company, the Hamilton Real Estate Association, and the Canada Fire and Marine Insurance Company. Baker conceived the idea of using a telegraph line between his house and the houses of two fellow chess players, enabling each player to telegraph his moves to his opponents. He organized the West Side Domestic Telegraph Company and a telegraph wire was strung between his house and that of his friends. On 29 August 1877, the first telephone transmissions took place where more than two telephones operated on one circuit. They were the second telephones to be leased in Canada. Baker started the Hamilton District Telegraphy Company on 15 July 1878, the first in the British Empire and ninth in the world. In May 1879, lines were extended to Dundas, establishing the first long-distance line in Canada. Baker attended Christ’s Church Cathedral, was a member of many clubs, including the Garrick Club, the Leander Boat Club, the Spinning Wheel (bicycle) Club, the Tamahaac Club, the Hamilton Thistle Club, and the Hamilton Club.