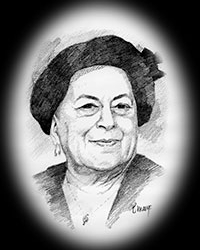 Hortense Gordon showed great talent early, exhibiting with the Ontario Society of Artists while still in her teens. In 1916 she began work at the Hamilton Technical School as an assistant to John Gordon whom she married in 1920. She continued teaching at the HTS until 1951, the last twenty years as head of the Art Department, succeeding her husband. In the 1930’s she began experimenting with abstract painting, becoming one of the first abstract artists in Hamilton and probably in Canada. She was a member of the Canadian Society of Graphic Artists, the Royal Canadian Academy of Art and Painters Eleven. Julius LeBow, a local art gallery owner said of Hortense Gordon. “Totally involved with all aspects of art in Hamilton, she profoundly affected everyone who came into contact with her.” She was a trail blazer of the popularization of modern art in Canada.