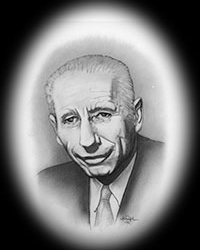 Harold Rogers, age 17 enlisted with the Argyll and Sutherland Highlanders, serving in the trenches in World War One. He returned to Hamilton at age 18. On Friday, 20 February 1920, Hal invited ten friends to have dinner with him at a local café. He wished to perpetuate the kind of service to Canada exemplified by thousands of young men who served their country in World War One. The Young Men’s Business Club, founded that evening, was later named the Kinsmen Club of Canada with 600 local chapters and 20,000 members. Leaving Hamilton in 1930, Hal Rogers tirelessly served the ideals of the Kinsmen service club. His fundraising efforts for community needs have won personal recognition for Hal Rogers, and the City of Hamilton where the Kinsmen began