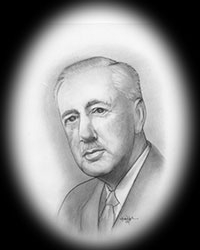 Born in Hamilton and educated at McMaster, Oxford and Yale Universities, George Gilmour returned to McMaster University in 1929 to take up the chair of Church History, a position he held for 27 years. In 1941 he was appointed Chancellor of McMaster University and, when the position was renamed in 1950, was appointed President and Vice Chancellor, a position he held until his retirement in 1961. In 1950, Dr. Gilmour was named Hamilton’s “Man of the Year”. His tenure as President saw the University re-organized as a private foundation and broadened from its religious background to an all-embracing institution. McMaster University’s position as a leader and innovator in research and education owes much to his vision.