Publish Date:
Thursday, April 8, 2021 - 11:00am
There is nothing to display at this time
Home > Hamilton History > General > Desjardins Canal Disaster 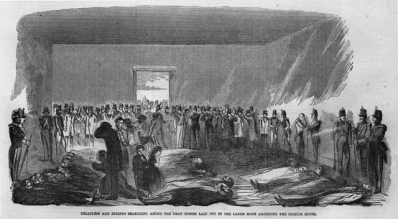 Relations and friends searching among the dead bodies laid out in the large room adjoining the station house. (Frank Leslie's Illustrated Newspaper, 4 April 1857: 277.)

Among the most harrowing scenes attending this fearful catastrophe, are the witnessing of the unhappy relatives recognizing the mangled remains of husbands, fathers, mothers, brothers and sisters. Yesterday morning the wife of Mr. Morley arrived from St. Catharine's, to pick out of the many dead his body. The scene was heartrending as she passed from one dead body to another, all marking death with greater horrors by being more or less mangled. At last one, even more distorted and mangled than the rest, was come to; and a wild cream but too well told her tale of woe. And in a large storehouse, strewed with dead bodies, and with others going the rounds to make similar heart-rending discoveries, was she left to kneel down and bewail her bereavement. Whilst on one side of the large building a row of bodies were placed, as yet unrecognized, and questions were asked of every new comer, if he or she knew anything of them, a sob or a moan would be hears in another part, indicating that some one had come from a distance and found all her sad expectations realized.

Nor was the circumstance less harrowing, of passing the stranger by, who, far from his home, and far from those who were dreaming of his return, there lay, a mangled, unrecognized, unwept victim of a railroad disaster. Here was evidently a poor Irish labourer; his pipe was still in his hand; and a smile played over his kindly countenance. One passed, yet another, and still another, and no one knew him. God only knew the grief that some would feel who did know him. Here again linger a larger group. They are looking at the figure of a woman, once beautiful, and though her hair lies tangled and wet, and her face is distorted from the effects of drowning, she still chains that idle crowd with a melancholy interest. She has a marriage ring on her finger. Two lockets are on her breast; and a brooch is suspended by a yellow ribbon round her neck. For whom did she wear them? Who were dear to her? To whom was she dear? No one knew her. God help her! she alone then required to be but recognized by him! And so passed the scene. Here a moan and a tear marked the recognition of the mangled remains of a friend or a relation. There strangers, with heavy hearts, gazed on those who were unwept; and though of themselves, if ever such a lot should be theirs. There may be scenes of sorrow and of horror, but who can conceive aught so utterly heart-rending, as when people go away in peace and happiness, to return this evening, or to-morrow, and are first heard of as mangled by drowned by such disaster.