Publish Date:
Thursday, April 8, 2021 - 11:00am
There is nothing to display at this time
Home > Hamilton History > General > Desjardins Canal Disaster

Who escaped, and how 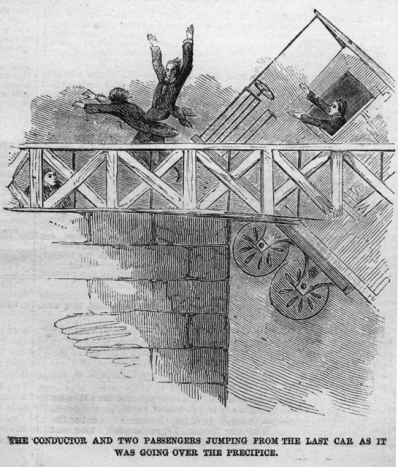 The conductor and two passengers jumping from the last car as it was going over the precipice. (Frank Leslie's Illustrated Newspaper, 4 April 1857: 277.)

Every person in the first passenger car, except Owen Doyle, James Barton, of Stratford, and two children between eight and nine years of age, perished. The escape of these seems perfectly miraculous. One of the children was thrown out of a window on to the ice, it knows not how. The other was dragged out of a window, having been up to its neck in water for some fifteen minutes in almost a senseless state. They were a little boy and a little girl, brother and sister. They can recollect nothing after the fearful crash, and being thrown upon their heads. Their mother, father and uncle perished, and Owen Doyle, who saved himself, is their uncle. He saved himself by forcing his way out of a window as the water was rushing in. He remembers swimming on to the ice; and then lost consciousness.

James Barton cannot tell how he got out of the window. He recollects but a wild scream - being dashed against the ceiling of the car. Half senseless and half drowned, he made a last spring for a window. He was picked off of a cake of ice a few minutes afterwards, senseless. The two children, marvellous to say, are but slightly injured; and Doyle and Barton are but comparatively little hurt. Doyle had his brother, and sister-in-law, two cousins, and a cousin's wife, and two nieces, all killed or drowned. And what with his own injuries, the fearful excitement of the scene he had passed through, and the loss of so many near and dear to him, the poor fellow wandered about almost bereft of his memory and his senses. Barton's father was also lost; they were sitting together when the car was turned upside down, and they were dashed against the top of it.

The escape of Richardson, Mr. Urquhart of the express, the mail conductor, and the baggage master, was equally marvellous. When the locomotive and tender went into the abyss literally, the baggage car swung round apparently as it was going over, and broke loose from the tender. The consequence was, it struck on the ice to the left of where the locomotive disappeared; and slid, so strong was the ice, a short distance. It never overturned; and its three inmates, though thrown among trunks and all sorts of things, strange and happy to say, escaped with but barely trifling bruises. The conductor, hearing the smash of the bridge, and standing at the open door of the car, leaped out just at the brink of the abyss. He escaped unhurt.

In the second car, the persons saved were the Conductor, Mr. Barrett, the Deputy Superintendent, Mr. Muir, and Mr. Jessop, an auditor. They were on the platform of the last car, and jumped off when they heard the concussion. Of those hurt in this car, were Dr. Macklem and Mr. T.C. Street, of the Falls. The former is very much injured in the head, and had a contusion in the side but it is hoped not seriously. Mr. Street's collar-bone was broken, his arm very badly hurt, and he was otherwise much bruised. Mr. _____ Curtis, of Ingersoll, was dreadfully injured in the spine, and was expected to die every moment. Mr. Barton, junior, of Woodstock, had his back broken, and is otherwise fearfully hurt.