Hamilton Public Library’s Local History & Archives recently received a donation of a battered old journal, written by a Victorian gentleman, Dr. Tiberius Hess. He writes of life in Hamilton from 1854-60. He also describes a time machine he built, governed by strange nautilus gears and powered by electricity and steam. Hess writes that he used the device to travel to present day Hamilton where he hid a set of the gears. He also crafted a set of six clue sets that are part of the journal; the cryptic clues reveal where he hid the gears. We think we’ve determined how Hess intends the clues to be unravelled. If you solve them and deduce the gears’ location, you could win a remarkable prize. More on that soon.

Read more on what we’ve determined about the clues thus far.

There are six sets of clues, each one spread over two pages. The clues send you on a geographic hunt, beginning with Tiberius Hess’ home located in downtown Hamilton of 1860. Solving each set of clues lets you to piece together latitude and longitude offsets. At each location, you will discover a new detail that will help you crack the cipher at the end of that clue set. The solution to the cipher produces two digits of the ultimate latitude and longitude of the hidden treasure.
The clues are varied: some clues involve simple geometry or math problems, while others require literary knowledge or research. Certain clues call on your logical reasoning and science trivia.

This is a contest you’re meant to play and share with others. Visit the discussion forum on hpl.ca/gears to share your discoveries and suggestions. You’re not alone. Collaborate, tease and learn from other players. Collaborate and talk to friends, family, classmates, coworkers, etc.

Playing the game involves collaboration, research, exploration and problem-solving. This contest was designed to get you out into the city to explore landmarks and historic sites. Get ready: the adventure starts now! 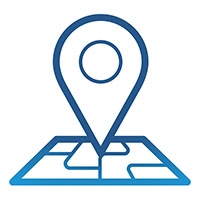 A geographic offset is the difference between two latitude and longitude reference points that is used to locate a specific place on a map.

Dr. Tiberius Hess starts the treasure hunt at the latitude and longitude of his home on Gore St. (now Wilson St.) between John and Hughson: 43.258915, -79.865911 Enter these coordinates into Google Maps and see for yourself!

The clues rely heavily on offsets from latitudes and longitudes, which are rounded to six decimal places. Since Hess only visited the Hamilton area, he had no need for the pre-decimal part of the coordinates (43 and -79) because they never change over the span of his travels. 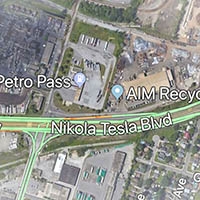 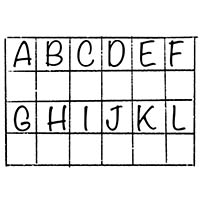 The point of solving a clue set is to fill the grid and figure out the offsets.

Each set of clues is made up of an empty offset grid and a series of cryptic clues. Solve the clues, add numbers to the grid and get the offset to an important destination. 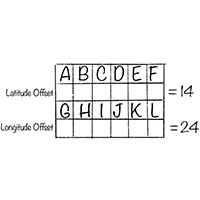 In his journal, Dr. Tiberius Hess places two numbers to the right of the offset grid. We believe this is his version of what is called a “check sum”. While the numbers don’t give any indication of the actual offsets, they are hints that show you you’re on the right track. If the numbers you place in the offset grids don’t add up to the check sum digits, you’ve probably made an error somewhere. 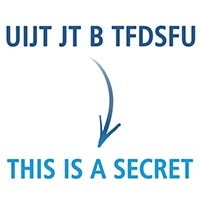 The clue set is encrypted using a keyed Caesar cipher.
Here’s how it works:
Let’s pretend one location is William Osler Elementary School in Dundas. Hess tells us to use a particular word from the location as a key to the cipher. In this case, let’s say the word is OSLER.

You create the keyed cipher alphabet by starting an alphabet with the letters from the key word (removing repeated letters). Complete that keyed alphabet without repeating any letters already used in the key until you get 26 letters.

Use the keyed alphabet to decode the cipher:

Now, separate the words and the apostrophe added:

If this were a real clue, the digits 1 and 0 would figure in the final latitude and longitude of the nautilus gears’ resting place. Remember to keep track of those digit pairs and which Clue Set they belong to! When you solve all six clue sets, you’ll have enough digits to find the prize. 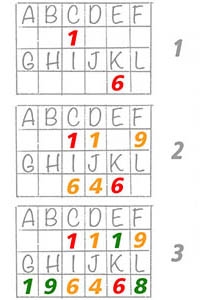 Clue #1
The number of ounces in a pint (16) Place the two digits of the answer in cells C and K. After Clue #1 the grid would look like:

Feeling inspired? You can submit your art to win a Makerspace prize too