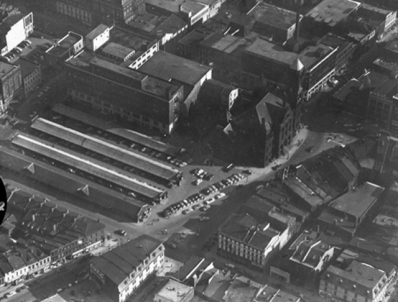 Renovations in 1914 saw the door to the long room painted and varnished. The assessor, John Nelligan, wrote out the Lord's Prayer in shorthand on a piece of paper and had the painter put it on the door before it was varnished. The door was later moved to the room where the Board of Control met and still later it was taken down to made way for the parking meter division of the City Treasurer's Department (44). The next year, a furor arose over secret sessions of the Board of Control. The announcement was made that this practice was to be discontinued immediately. Within three hours a workman arrived at the city hall, went to the Board of Control room and placed blinds on the outer door windows of the room, on which was painted in large white letters "Private Session" (45). 1922 brought an upset over phone bills. The enormous phone bill of the previous year of $8,474.27 prompted calls for more financial control. However, there were no suggestions for the discontinuation of phones in the homes of all members of council, Board of Control and city officials with whom it was necessary to provide easy communication for convenience in transacting business (46).

That same year concerns arose over the amount of space available in the council chamber for pictures of former mayors. The plan was to reproduce the mayors in a smaller format and place them in panels. As the Spectator reported, "[d]ifficulty may be experienced in reducing the photos of some of the old-time mayors to small enough size, it is feared. The present yard square frames seem scarcely large enough to contain the luxuriant growths of whiskers which are sported by many of the past chief magistrates...When finished, it is expected that the arrangement of pictures will enhance the dusty grandeur of the council room, instead of giving it the mausoleum-like air it possesses at present" (47).

In 1927, an addition was made to the decor of City Hall with the presentation of an elk's head to the city council by the Benevolent and Protective Order of Elks, Calgary Lodge No. 4. By 1949, however, Elmer, as he was familiarly known, was looking a bit the worse for wear. Alderman Malcolm K. Heddle, chairman of the property and license committee of City Council, pointed out that Elmer had lost one of his glass eyes, looked a bit mouldy around the mouth and one of the two brackets fixing him to his post was broken. Staff were divided in their opinions about what should happen to Elmer (48).