The first problems surfaced in 1891. The Spectator reported that "[i]t is becoming painfully evident that the plaster all through the building is not well put on, and that it may fall from the ceilings at any moment. A day or two ago a large piece fell from the ceiling in the basement. Yesterday a still larger piece - about six feet by four - tumbled from the ceiling of the mayor's private office and crashed down on the mayor's desk and the chair in which His Worship is wont to sit. If he had been there at the time it fell, it is not unlikely that there would have been a large and imposing funeral in a day or two as a result of the sudden descent, for the ceiling is 22 or 23 feet high" (39). 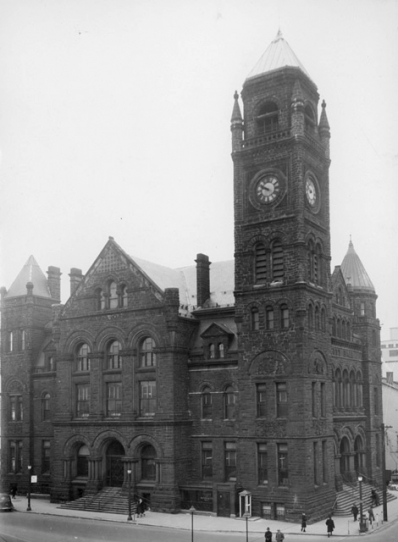 In 1894 electric lights were introduced into the hall, the contract being awarded to the Hamilton Electric and Power Company (40). That same year a debate arose between Mayor Alexander David Stewart and Reverand James Murray, the minister of one of the local churches, who took exception to the manner in which the mayor was handling city business. Murray "animadverted somewhat forcibly on the disgrace of the chief magistrate holding the position of secretary of a jockey club and having to appear in the police court to answer a charge of assault, coupled with a regret that the city seemed to be governed by sports and sluggers ... he preached a thoroughly practical sermon on the duties of citizenship, vehemently denouncing the dispensation of liquor in the city hall and stigmatising that imposing pile as a Chamber of Bacchus" (41). The minister was referring to an incident at the Jockey Club roadhouse where Mr. Lottridge was struck by the Mayor. When it came to court, Mr. Lottridge having lodged a charge of wilful assault against His Worship, "Magistrate Jelfs quickly found the club secretary [Stewart] guilty." A fine of $1.00 and costs was assessed against him (42).

In 1895, the hall welcomed its first female employee. When her employment was raised at council, a special committee was struck. The report read:

To His Worship the Mayor and Aldermen of the City of Hamilton,
Gentlemen, -

Your Special Committee appointed at the last meeting to report on the advisability of a clerk being appointed in the Mayor's office, beg to report that they have examined into the matter, and recommend that Miss Minnie Stewart be appointed to act as the Mayor's clerk, and perform such other work as may be required of her by the Chairman of the Committees, her salary to be twenty-five dollars per month.