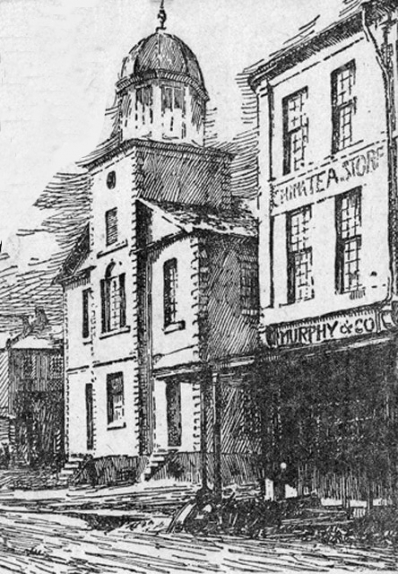 The building was described as follows: "[t]he hall's thirty feet of frontage facing on James Street contained two entrances, each gained by a short flight of steps. As an architectural gesture a small square tower and dome surmounted the hall. On the ground floor and in the basement a brisk trade was carried on in butter and eggs, poultry and meat. The upper story was an open hall with the city clerk's office at the rear, and opposite, at the east end of the building, a stage for local and travelling talent" (14). The Hamilton Spectator noted "[f]or a while the whole second flat of the building was used as a public hall as well as a council chamber ... old citizens declare that there were sliding doors between the council chamber and the public hall. Probably the sliding doors were put in some years after the building was put up, when the growing dignity of the town demanded that its civic dignitaries should have an apartment all to themselves The public hall was for years the only suitable place in the town for the holding of public meetings and entertainments. Many a dramatic performance - amateur and professional - was given there, and lectures, concerts, public civic meetings, political gatherings, and panoramas were held in that old hall" (15).

The hall was no stranger to political infighting. In 1855, the Spectator reported that Mayor Magill had hoped to celebrate the fall of Sevastopol with a public celebration coinciding with a visit from the Governor-General and the Honourable John A. MacDonald. Some members of the public who disliked MacDonald protested the event, and stormed the hall during a council meeting. The leader of the mob, Hamilton Councillor Teddy Brannigan, attempted to speak to the crowd but was stopped by Mayor Magill himself, who placed Brannigan under arrest after the Chief Constable refused. The Mayor read the riot act to the crowd and they dispersed, unwilling to oppose Mayor Magill's will (15).