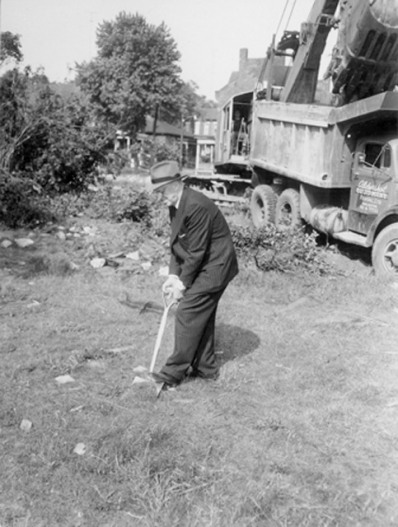 Mayor Jackson digs the first shovelful of dirt for the construction of City Hall, 1958

The tearing down of houses for the new city hall site began in June of 1958. The $9,400,000 project turned the first sod on July 2, 1958 (67). Mayor Jackson drove the steam shovel and Joseph Pigott took home movies (68). Meanwhile, the city hall committee was appointing a subcommittee to prepare a list of furniture that should be kept from the old city hall awaiting the creation of a city museum (69). Professor Eric Arthur was brought in as an expert to help them in their choices. Some of the material kept as mementos "to represent an era" included desks, chairs, benches, the large pictures of the former mayors, sections of brass railing, two fireplaces, two marble directories, clock mechanisms, doors, balusters, tables, clothes racks and the coronation chair (70). 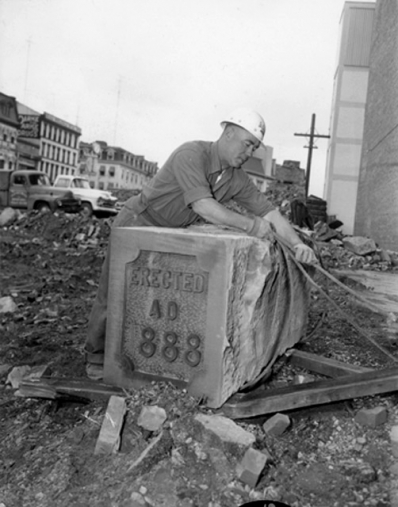 Removing the cornerstone of old City Hall, laid in 1888

Construction proceeded fairly smoothly but was not without its tragedies. On December 12, 1958, Ernest Quirt was killed when he fell through a hole in the scaffolding (71). On May 21, 1960, Lawrence Shaw died when the window washing machine he was using collapsed (72). Just prior to that, on May 15, 1960, two 200 pound slabs of marble fell off the building, one crashing to the ground and the other landing on a 7th floor canopy (72). The old city hall closed officially on October 28, 1960, and ownership transferred to Eatons. The new city hall opened for business at 8:45 a.m. on October 31, 1960 (73) . The official opening did not take place until November 21, 1960, when Governor-General Vanier officiated at the ribbon cutting. 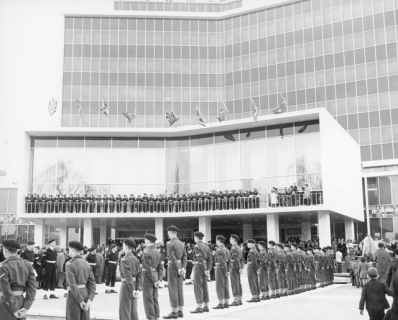 Wrecking of the old city hall began in January of 1961 and was finished when the cornerstone was hauled away in June of that year. Most of the rock taken from the old city hall was reduced to rubble and used as fill for the wharf extension at Catherine Street. Some 500 tons of wall stone were placed in storage at King's Forest (74). It did not take long for the first problem with the new city hall to surface. In July of 1961 visitors to the city hall were puzzled to see red tape crisscrossing the automatic doors at the front of the building. This precaution followed the collision of a citizen with the front door: "[t]he glass didn't break but the citizen's head did and five stitches were needed to close a gash over his eye" (75). One of these doors subsequently exploded, showering the lobby with shards of broken glass (76). And then there was the marble, again. It seemed that the pins anchoring it could not hold it up and large chunks kept falling off.The City Hall soon became too small for the staff and various departments were moved to other accommodation throughout the city. The building itself was in serious need of repair as the city approached the new millennium. There were discussions on the feasibility of repairing the city hall or the alternative of tearing it down and starting over. There were even suggestions that the site be sold to a developer. In 2005 the City Hall was designated as a Heritage Site and in August of that year renovations began to restore the building to its former glory.