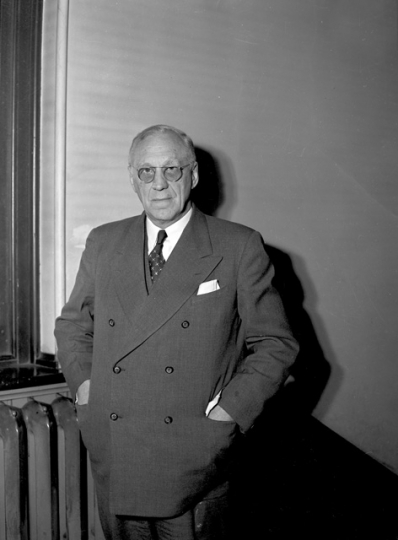 One of the problems facing the council in considering the possibility of building a new City Hall was where to put it. Many sites were suggested. The most prominent was Faludi’s Civic Centre, which suggested the City Hall be built on the block east of the Court House. The annex on stilts, proposed by Mayor Lloyd D. Jackson, proposed an annex over the market to be linked with the city hall proper by an elevated walkway "which was later to go down in history as the ill-fated "bridge of sighs". Another of Mayor Jackson's ideas was to expropriate the Lister Building. As they moved towards expropriation it was explained that steps were being taken to "freeze the price" of the five storey office building (56). Not surprisingly the tenants of the Lister Building were less than thrilled at the prospect. "The Chief Magistrate lashed out at the tenants, stating publicly that "[c]ivic business is more important than private business". The Mayor felt the annex should be close to city hall: "[n]o further away than across the street, even if to obtain [the] same, some tenants in the present buildings are inconvenienced. This is civic business; [it] is most important and should have top priority" (57). The idea was brought to an abrupt halt, to the relief of the tenants, when council voted 12 - 9 against expropriation (56). Other suggestions included renting space from Coppley, Noyes and Randall or in the Empire Building, or relocating to the site of the old Y.M.C.A. or old Central Collegiate (56).

1950 arrived with a prophecy that "it is becoming apparent that our City Hall controversy is to go on interminably until all of this generation is dead and buried" (57). The annex on stilts enjoyed a brief renaissance but the Civic Centre proposal for the Prince's Square area was the increasingly popular choice. On the other most popular site, the old H.C.C.I. grounds, Alderman MacDonald envisaged "...a city hall in the style of the U.N. secretariat, nine stories high at its loftiest height and costing between $1,250,000 and $1,500,000". The newspapers described the debate following these proposals as "whimsical" (58). In October of 1950 a special committee recommended the hall be built either on the H.C.C.I. grounds or on Prince's Square. In 1951 the City Planning commissioner recommended that an American expert be imported to determine the best site. Mayor Jackson's response to this was "eye-wash" (58). In 1952 various other sites were proposed by the Mayor including York Street west of Macnab, west of the Hamilton Public Library on Main Street to the lumberyard, south on Jackson to Hunter in the John Street area or north of the new Hydro building at John and Rebecca.