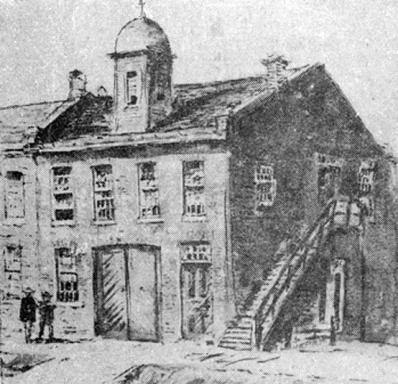 One of the other priorities on incorporation had been the creation of a market in a suitable location. The first location chosen proved to be unsuitable, and by 1837 the "Market Question" was a topic of conversation in town meetings. Upon the motion of Mr. Jackson, seconded by Mr. Gilbert, it was resolved that "from the inconvenience arising from the present location of the market, - "being at one extremity of the town, and the difficulty of access during the wet seasons, and a general dislike shown by the inhabitants to attend the same - it is found expedient to erect a second market in [a] more central situation, where the inhabitants would find it more easy of access, during the bad state of the roads, and more general accommodation afforded as well to the people of the town as the country" (6).

A letter was read from the Messrs. Stinson containing an offer for ground for the proposed new market, which would be placed on their property at King William and Hughson Streets (7). The board decided to advertise for plans for a market house and "[i]t was ordered that it should be advertised in the three papers published in this town, that the Board is ready to receive contracts and plans, for a market building to be erected on the corner of James and York Streets, of brick or stone, measuring 50 feet by 90 feet with a hall above the market place and cellars under the whole" (8).

William Hardy's plan was chosen, with the board awarding "the premium of £7/10/2 to Mr. Wm. Hardy for the best plan of the new market house".  They also awarded £O/25/0 to Messrs. Tassie and Shenton each for their plans (9). Tenders were to be given in by May 29 (10). There was a slight delay in the construction due to the Rebellion (11) but by February of 1839 the Board was ordering "[t]hat Messrs. Gilbert, Bradly, Daily and Carpenter be appointed to examine the work done to the new market by Mr. Hardy to see if it had been done according to contract" (12).  Mr. Hardy was eventually paid a total of £2,017/15/0 for the contract (13). The Board then moved into the Market Hall to hold their meetings. They outfitted it by moving the furniture from the old meeting place to the Hall (14).