The Mount Hope Branch Public Washroom is out of order. We apologize for the inconvenience.

Public Printing/Photocopying on the 3rd Floor of Central Not Working.

Please use the 1st floor or 2nd floor Printers

Starting Monday May 9, construction starts on Rymal Road East between Massena Drive and Republic Avenue near the Turner Park Branch. The lights will be deactivated and the turning lanes will be closed for approximately one week. 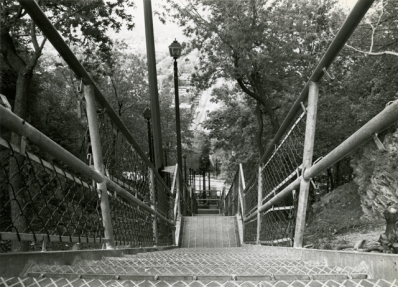 Currently there are 5 sets of stairs up the escarpment in addition to a privately-built set of steps. After the Jolley Cut was rebuilt, the John and Ferguson steps disappeared and their remnants were incorporated into the walkways at Sam Lawrence Park.

These steps connect the West Mountain to the lower west city, coming close to the front door of the Chedoke Civic Golf Course clubhouse. There are 289 steps.

The original Dundurn wooden steps were replaced in the 1990s by steel steps. There are 326 steps.

The original James Street wooden steps were replaced in 1987. The stairs originate at Southam Park on the mountain at the top of the Claremont Access. There are 227 steps.

The original wooden steps built in 1903 consisted of 6” to 7 ¼” risers. The stringers rested on cedar posts sunk 4-7’ in the ground. The original staircase had 570 steps. After a rock slide in March of 1983 they were replaced with metal steps just east of the position of the original steps and they now follow the path of the old East End Incline Railway. There are 498 steps.

The Kenilworth steps connect the East Mountain to the Escarpment Rail Trail/Bruce Trail, and continue down to the Rosedale area of Hamilton. There are 228 steps.

Before the city completed construction on the Kenilworth stairs, a privately built set of steps named Uli’s Steps connected the upper and lower city. These steps were built as a retirement project by a Hamiltonian named Uli who spent two years on the project. They have 305 steps.