Publish Date:
Tuesday, May 4, 2021 - 8:00am
There is nothing to display at this time
Home > Hamilton History > General > History of Gore Park 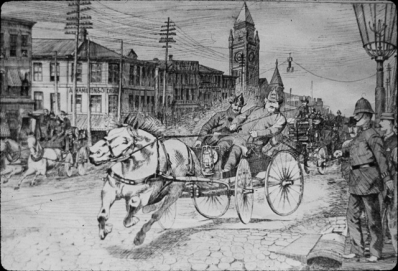 Meanwhile, the statue already raised in the middle of the John and Hughson intersection was causing great consternation. Fire Chief Aitchison, a man not known for his temperate behaviour, collided with another rig at this spot while speeding to a fire. His driver, Matthew Brittain, described the tragedy:
"I was cleaning harness when that alarm broke...and on learning it was on West Avenue South we started out, with Chief Aitcheson driving. He always did drive and I just sat next to him. We went south on John Street, and the Chief decided to go to Main before going east, for West Avenue wasn't cut through between King and Main then, and just on clearing the building at King Street we saw the chemical wagon from central bearing down on us from the west. We nearly cleared it, but when the pole struck our rear wheel we were both thrown against the granite base of the monument. I was picked up for dead and taken into Wilson's shoe store, while the chief was taken away in the ambulance but I fooled them. I was out of the hospital in a month, though I've had the hiccoughs from that day, April 5, 1905, till now. The day before the accident I weighed 173 pounds, and a month later I was down to 138 and I haven't got back much since then” (16).

The chief died of his injuries. City council immediately wrote to the Board of Parks Management requesting removal of the statue to a site in the Gore Park extension (17). The statue was not actually moved until 1907 when Thomas Fanning's tender of $450 was accepted for the job (18). 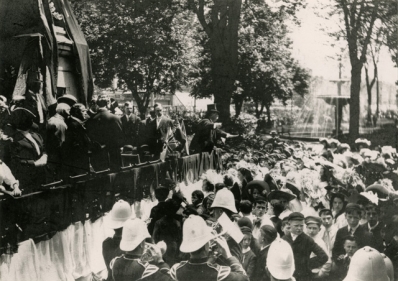 Dedication of the Queen Victoria Statue, 1908

During this time period the Queen Victoria Memorial Committee had been busy and they prepared to unveil their statue on May 25, 1908. A group of dignitaries met Governor General Lord Gray at the T.H. & B. Station and, after being greeted by an honour guard from the 13th Regiment, they set off in automobiles for the site. After following a rather circuitous route that took them as far east as the Delta and as far west as Dundurn Park, they finally arrived to cheers and applause. There stood a guard of honour of 100 men from each of the 91st and the 13th regiments and a massed choir of all the children from both the separate and public schools under the direction of Professor Johnson. The children burst into a rousing rendition of "O Canada". Many enthusiastic and lengthy speeches ensued and the statue was duly unveiled and presented to the city. The cost of $10,000 had been raised wholly by subscription. 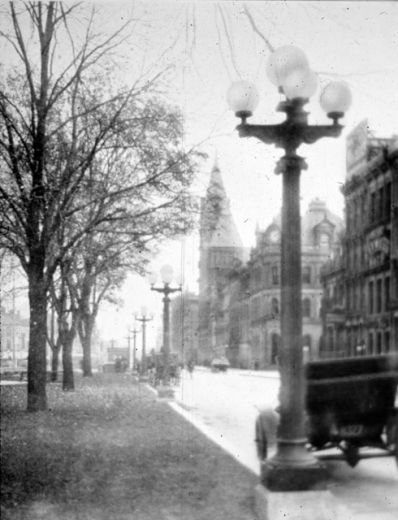 The question of the Gore Park fence arose again in May of 1909 when William Southam offered to buy and "erect 12 ornamental poles on Gore Park provided the iron fence is removed" (19). After listening to the clamour of the citizenry outside the gates, council decided on October 20th to send a Subcommittee on Gore Fence to the Board of Works to "ascertain what part of the expense they would assume should the Board decide to remove the fence." (20) The Board of Works was willing and in December the Parks Board voted "(t)hat the fence surrounding Gore Park be removed and that a cement curb be erected provided the citizens who signed [the] petition for fence removal carry out the scheme for the erection of 12 more ornamental lamp posts." (21) The park was now free of all access restrictions and was available to the public twenty-four hours a day.

After finally gaining the long sought after access, a new threat arose. Stanley Mills offered the City $250,000 for Gore Park although the current assessed value was only $50,000. He proposed to build a fifteen-storey business block on the site. "The firm would, if necessary to obtain the property, also undertake to maintain, for all time, a public park on the entire roof of the building", stated Mills. But Councillors had finally learned their lesson. One of the Controllers stated, "It is worth more to the city than any man or firm could pay for it. Any public man who would seriously propose to sell it would be ringing his own death knell" (22).