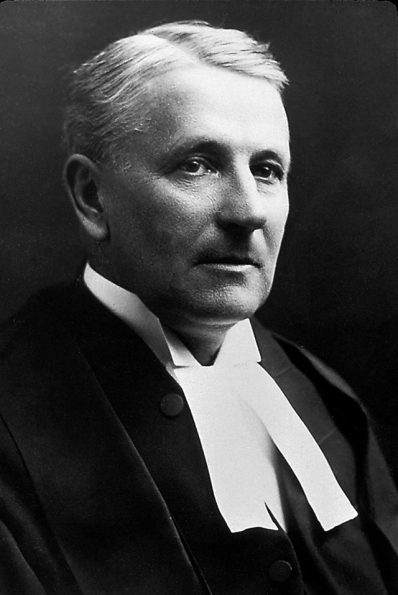 A committee of aldermen was delegated to approach the Board of Works to request that they turn over the property in question to the Parks Committee (9). They proposed to extend Gore Park from Hughson to John Street, sod the area and plant flowers. The only objectors to this improvement seemed to be the officers of the 13th Battalion. They wanted "a place on which to drill and seem to have a dislike to performing on anything but paved street" (10). Despite these objections the matter was brought up in the council meeting of April 10th. "Mayor Teetzel took the chair promptly at 8 o'clock. His worship was in evening dress and anxious to join his box party at the Opera House, so he lost no time in opening but it soon became apparent that he was doomed to disappointment, and the stroke of 11 o'clock found him still in the council chamber. The meeting was an erratic one and more than one of the members got tangled up...Gore Park extension finally passed the Council with a good majority in favour of [the] park idea...Mr. Frederick W. Watkins said it was like fighting against one's own right arm to oppose the Battalion but he really thought it was not opposing the Regiment to advocate making the heart of the city a thing of beauty and a joy forever. He thought the Council now had the chance to do a great good for the women - the mothers of the city - and their little children." (11) The park idea passed 12 to 9.

It was during this last decade of the 19th century that one of the embellishments to the Gore was erected. Following Sir John A. Macdonald's death on June 6, 1891, the Board of Trade on December 4, 1891 proposed erecting a memorial to Canada’s first Prime Minister (12). The statue was cast in bronze at 8 feet 3 inches in height. It arrived in Hamilton on October 30, 1893 and was hoisted up onto a pedestal of grey New Brunswick granite 11 feet high and wrapped in a winding sheet of loyal bunting (13). 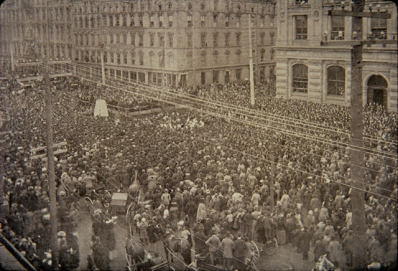 The unveiling of the Sir John A. Macdonald statue, 1893

On November 1, 1893 Sir John Thompson, the current prime minister, and a field of dignitaries joined 20,000 people for the unveiling in the intersection of King and Hughson Streets. Sir John Thompson pushed an electric button and the veils dropped. The crowds cheered, the 13th Battalion played "Hail to the Chief" and the heavens dropped a torrential downpour on the assembled multitude.

The nineteenth century ended and Hamilton, with its Gore Park still intact, entered the twentieth century. Just before, in November of 1899, City Council had passed a By-Law enacting the "Public Parks Act" in Hamilton. In January the first Board of Parks Management was appointed. Their duty was to oversee all present and future parks. One of the first pieces of business placed before the new Board was an offer, by the Canadian Club, "to place a steel flagpole in Gore Extension". They accepted with alacrity and a flagpole in the style of an oil derrick was ordered. It was 150 feet tall and "(m)ade of steel angles and pipe thoroughly galvanized and guaranteed". The total cost of this imposing structure was $165 and the official unveiling, or rather unfurling, took place on Victoria Day. Mrs. Teetzel, the Mayor's wife, "with a tug of the halyards which would have warmed the heart of a yeoman signaller, loosed the slipknots holding the ensign and it blossomed free and fair in the breeze”.