The next proposed expenditure created a huge turmoil. After an unsuccessful try before on January 8, 1912, a By-Law was passed "for the issue of debentures to the amount of $18,500 to provide underground lavatories at or near the corner of Hughson and King Streets." There was a public referendum which passed 2,922 to 1,608. Women were not allowed to vote at that time and they became some of the most vehement objectors to the planned facilities. 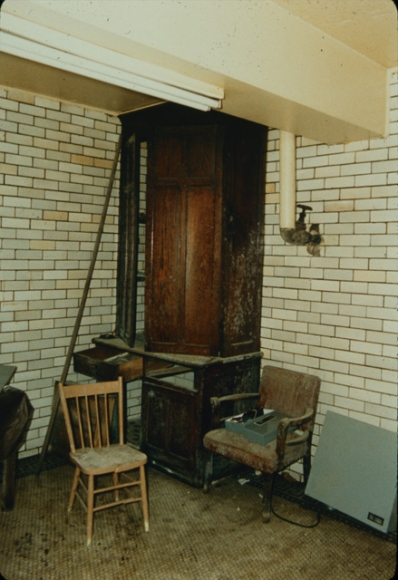 Inside the Gore Park washrooms

Council had architect Mr. Peene complete all the plans and specifications and call for tenders (23). The next problem arose when the tenders were opened and were all too high. Mr. Peene was instructed to reduce his plans "to enable it to be constructed within the amount expropriated." (24) After re-tendering, the lowest bid was still too high and council bowed to the inevitable. Council accepted the tender and voted to take an additional $4,500 from the contingency fund to make up the difference (25). By February 1913 they were finished and attendants had been hired. Two married couples were hired to cover two shifts. The husbands were paid $600 annually and the wives $300. This vast difference was explained by the Committee who said that they "took into consideration that the male attendants take the heavy work of attending the furnaces, etc.” (26).

In 1921 the first of the tree skirmishes occurred. The outcry followed "the felling of the tree known as the "Prince of Wales tree"... planted there during the historic visit of the late King Edward” (27). Alfred Wright, chairman of the Board of Parks Management, responded by stating "(t)he tree in question was hollow and dangerous to those frequenting the park. While the board takes the stand that all such historic relics should be carefully preserved, it was regretfully obliged to safeguard citizens by removing it” (28). 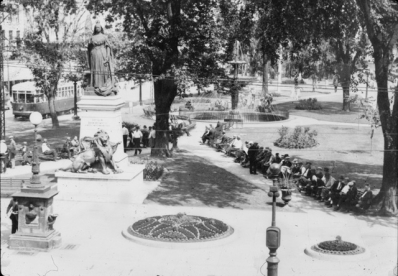 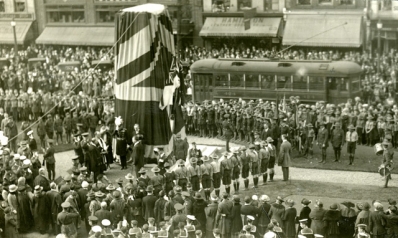 Dedication of the Cenotaph, 1923

Also in 1921, a combined committee of the Men's and Women's Canadian Club approached City council asking permission, with the Parks Board consenting, to erect a Cenotaph in the Gore Park extension on the site of the previously erected "oil derrick" flagpole (29). The plan was agreed to and a call for designs went out. Eight were submitted but the judges could not come to an agreement except that design No. 2, by F.H. Taylor, had “possibilities”. The sketch and artist were sent to Toronto to get suggestions on minor changes and on the re-design of the base. This decision was made by the Canadian Club at their executive meeting of August 5, 1921 (30). By August 31st the winning designer was announced as W.R. Souter, whose sketches had not been accepted by the first assessors at all. Mr. Taylor had disappeared from the picture. Souter's design could be constructed for between 4 and 5 thousand dollars (31). Construction began and the Cenotaph was officially unveiled by the Governor General, Earl Byng of Vimy, on May 22, 1923. The Canadian Club had erected the Memorial solely by private donation. All three monuments in the Gore, therefore, were erected solely by private subscription and did not cost the city a cent (32).

A pleasant change to Gore Park came in December of 1927 when it was decorated for Christmas. A tree of sorts was built in the fountain with evergreens, tinsel and coloured electric lights (33). As the 1930s began, yet another politician came up with a plan requiring "Goring the Gore". Mayor Peebles and City Engineer McFaul proposed slicing off 20 feet from the north side to allow a street railway diamond at King and James (34). Mayor Peebles had previously expressed the hope that in 50 years the park would have disappeared. The Herald was strongly opposed to the idea of changing Gore Park in any way and voiced the opinion strongly as they stated "(a)ll such open spaces and squares should be protected to the last inch. It is impossible to compensate the public for the loss of such priceless property. There is nothing that could be done or paid that would make up to the citizens for the loss of such a heritage” (35). 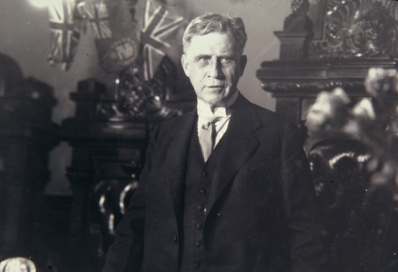 Gore Park had once again been saved but another problem cropped up almost immediately. Benches had been removed from Prince's Square and those citizens looking for a place to sit moved to the Gore. This led to a complaint being lodged with the Parks Board through T.B. McQuesten: "Mr. McQuesten announced that a well-known Hamilton lady had approached him regarding the practice of the city in permitting idlers to congregate in the park during the summer months. Visitors obtained a very unfavourable impression of Hamilton, she said, because of these habitués, who, like the lilies of the field, toiled not." Mr. McQuesten was inclined to think there was something in the complaint. "Let these old fellows sit at home," he remarked. "Maybe their wives won't let them," (36) Chairman Langs observed. The decade of the forties was a quiet one for Gore Park. Hamiltonians dealt with the repercussions of World War II and prepared to celebrate the centennial of Hamilton in 1946.