I am searching beneath and behind surface characteristics for metaphors to explore the way disparate memories meld and shift over time. It is neither necessary nor important that you can read text or identify other fragments; it is your reaction to the images that is important.

In this series of had printed one of a kind gelatin paper photographic images I exposed each sheet of light sensitive paper several times, carefully protecting earlier layers while making additional exposures. Sometimes words are important, other times they are textures, a collection of alphabet letters used to suggest something else. Sometimes two images might resemble inversions of each other. Sometimes something is printed in reverse: black is white.

Here are some of the many "things" I drew upon.

Colleen Lynch earned a couple of university degrees and continues to conduct research projects, some of which have resulted in international travelling exhibitions; others become personal series of artworks.  In her own art she delights in experimentation to develop original formats and techniques. Art projects evolve from her surroundings and from reading and research: geology, archaeology, anthropology, traditional material cultures, mythology, and philosophy. Concepts begin to coalesce into a series when she recognizes a connection between words or knowledge and a specific technique. "I love words," she says. "I love to play with words and am especially delighted when a series, no matter how serious, can also encapsulate humour."

Colleen has art work in the Canadian Museum of History, and in significant Royal and private collections in several countries. Her artworks were often gifts to foreign dignitaries from the Department of External Affairs and the South Street Seaport Museum in New York City commissioned jewelry to present to the Queen and King of Norway. She continues to exhibit across North America and has received recognition and multiple awards in several provinces and states.

The Dundas Branch offers artists from the community an opportunity to exhibit their work. 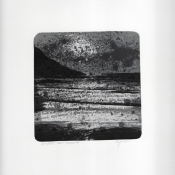